These pages were prepared
for the Smythe Family.

Percy’s letters of Dec 13th to hand on 19th Jan. Well Percy from what we know & the little we are told, there doesn’t appear to be the remotest chance of fighting the Turks as an invasion by Turkey would be very dangerous with no prospect of success. They’d have to cross a large waterless desert so sandy that the transport of guns, ammunition & stores would be very difficult, if not impossible. So there will be no Turks to fight as far as we can see. There does not appear to be any immediate prospect of going to the front. Won’t it be grand if we don’t get there at all, especially when we return covered with – well, dust.

Am glad that you managed to enjoy yourself on your holidays in spite of your ltd cash supply. Of course there is no need to ask you Viv if you enjoyed yours. That’s a foregone conclusion. But I say whatever you do don’t let your desire to enter connubial bliss outweigh my desire to be best man unless I’m detained an unreasonable time. You know, you are getting one in on me going off first, so the least you can do is to allow me to kick you off.

Percy I’m shocked or rather surprised at you saying that 3 weeks is rather long to stay in one place. We’ve been here about 2 months with the prospect of still being here till the war is over.

What have you decided to call the house? It will be quite strange for us when we return going to Rd to look for a strange house. I suppose you are living in it as I write these lines. I try to picture the house with you all sitting down to tea. I can get the tea part OK but the other refuses to materialise.

Oh yes I got both your letter & parcel at Alexandria, that is if the parcel you refer to was the French & German vocabularies. Thank Mr PJJ for his kind wishes & tell him I hope all his family & himself are well & happy. 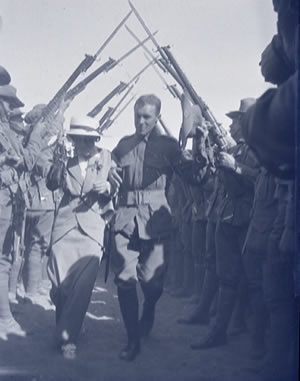 The photo is part of a collection taken by
#664 Corporal Victor Cromwell.
Reproduced here by courtesy of
Michael Treloar Antiquarian Booksellers.

Last Sunday the 17th of Jan there was rather a romantic wedding celebrated here in camp in the 4th Bn. A young English angel being very much in love followed the object of her affections to Australia & finding that he had enlisted & sailed with the troops & still being very much in love followed him here & at last was rewarded by finding her quarry having a fine old time with the troops. So she decided to put the acid on him & with the aid of the 4th Bn chaplain she did it. The ceremony eventuated in the 4th lines & after the nuptial knot had been tied, the happy pair marched to the taxi waiting on the road. The march which was very impressive, despite the fact that one of them was out of step, was between two ranks of the grooms friends, who with fixed bayonets formed an avenue & arch of glittering steel. There were a large number of snapshotters present & they secured several good pictures of the unique wedding. The happy groom obtained a fortnight’s leave of absence in which to have his honeymoon & considering what a pretty bride he has one could hardly blame him if he forgets to come back. [more information]

On Monday there was a tactical scheme chiefly to test the lines of communications in the attack. Of course it was a coy affair & we siglrs were the aforesaid lines. If the messages had been P.O. ones they would have been marked “Delayed by interruption to lines”_ _ _. As it was they were marked with shocking language. Never in my wildest dreams did I think that Capt Brown was so very fluent_ _ _. No 2 and 4 platoons had to attack Nos 1 and 3 to be reserve. I gave my siglrs careful instructions as to what to do till the Ds came. Myself & 2 others had to be with the Capt while one was with each Platoon. The Capt ordered one of his 3 to remain on a ridge a bit in front & keep the guiding platoon in the right direction, as the position was often out of sight for a good while. The Capt galloped madly to the front not telling us to follow so I thort he’d be back in a sec so I staid where I was – with the 2 ptns in reserve. Well when Brown got to the front he started calling in semaphore using the general call instead of the proper calls. The guiding siglr & No 4 ptn siglr both answered & Brown sent “signaller come here” he evidently meant me, No 4 man doubled over to him. He then signalled to No 4 ptn which was signallerless & the guiding man answered, & for some reason or other got a bit mixed & Brown lost patience & sent another message for me to him which I read & doubled over to find the Capt ropeable. He ordered me to march them straight back to camp as they were no ___ good, then altered his mind & told me to take them to the top of a nearby hill & drill them where he could see them, remarking that he’d do without signallers. He then went to the Coy & told them at great length what he thort of us. It isn’t printable. He was partly to blame as I was going to tell him the ptn calls & he said he didn’t want to know them. If he had known them & wanted me all he had to do was to give my call & it would be OK. I saw G.A. about it afterwards & he must have explained things as it was OK next day so far as I was concerned. Of course we got nothing when we got back. I nearly had a fight with a chap in my tent that started slinging mud. I told him if he was half a good a soldier as I was a siglr he’d be about 10 times better than he was & that from me to him, a man who saw service in S.A. of course got him riled, but luckily (for me_ _ _.) it got no further than words. The beggar is more often in the guard tent than out of it, so he had no room to talk. The next morning when we were being inspected the Capt stopped opposite to Smillie, one of the men in the messup & saw two crossed flags in his hat which someone had put there for a joke. After looking Smillie up & down asked him what he had in his hat. Smillie thort a while & then took his hat off & looked. The Capt then said “Take that ## off. You aren’t entitled to wear that. You are not QUITE a signlr yet”. Smillie is out for gore now. The gore of the man who played the joke_ _ _. On the Wednesday another scheme was carried out exactly similar & everything went off smoothly except one man made an awful blunder in a message & got the Capt going again. The rest of us were OK.

On Tuesday we did a ten mile route march the last 2 throu the sand. Had to carry everything that we’d need on the field. The whole of the 1st Brigade turned out. Infantry, Artillery, Machine guns, transport, A.M.C. & the rest of the whole __ family.

Thursday morning we did very little & it was a holiday for all the 3rd that weren’t on duty. No 1 Platoon was on duty & tho I was not actually doing guard being a signaller, I was not allowed out. We are getting leave tomorrow 9a to 9p instead so that is better still. During the day nearly had another fight cos I exercised my authority & ordered a chap to tidy up his kit. However it again blew over. Its very little use asking some of the beggars to do anything & if you tell them & make them do it they want to fight you _ _ _. I can see myself getting two lovely eyes one of these days & then having the pleasure of sitting the chap in the guard tent _ _ _.

Yesterday & today we had more attack schemes & tho I was two men short (Smillie in the guard tent throu breaking camp & another absent without leave) we got on OK. The Capt was quite nice & was chatting a treat. He told me that if I showed myself competent I’d get promotion the same as any one else in the Coy. I must be getting into his good books again.

I’ve got a new nickname which is spreading through the Coy. It is “PD” – pronounced Pip Don” – the phonetical pronunciation. I was instructing a squad & some of my tent heard me using them & it tickled their fancy & there you are. Now the strangeness had worn off & it is getting quite familiar. I am getting it everywhere. Its Pip don this & Pip Don that all day from my tent & when on the march.

It almost breaks me up trying t do anything with A Coy siglrs. 4 are very will & all that but out of them, 1 only is any good. The other two are good Morse men but poor on semaphore & on top of that are often out of camp without leave & when they get back they have several days in the guard tent, then they get some other punishment. And to cap it all the siglrs are wanted almost every day on different schemes & consequently cannot give them any proper practise. If ever we go to the front I’ll try & get a photo taken of us. We are the biggest lot of outlaws you could imagine. If they don’t improve soon I’ll have to get them exchanged if possible tho its rather late to train new men. One of them wants to go back to the ranks & says he is going to make big blunders in any schemes that are on until they kick him back. He started off well the other day. It won’t need a dozen more like it to get him sacked.

Carrying the packs all day over the heavy sand here is playing up with the men a lot. About sixty of them are in the hospital suffering with hernia & as our drill has now been extended to 5pm instead of 3 I suppose there will be more cases. We now fall in at 8.30. March off at 9 & back to camp at 5p. I might say A Coy is the only one that falls in at 8.30, in fact we fall in at 8.25, all the others do not fall in till 8.45. I think it is so that the Sgts will have their states ready for the O.C. at 8.45 when he comes along.

Well I’ve no more news this time so will close with heaps of love to you all, hoping you all are well & happy as we are here.