Note from the author

These pages were written by Dorothy Bremner for the
Smythe Family.

Of Bunyips and Billabongs

Granny Smythe’s older grandchildren remember her in the 1930s as an elderly widow with a wry sense of humour and an ability to enthral with her stories told about her humble home in Victoria, encounters with Ned Kelly in her childhood, bunyips in the Winton Swamp, Lord Belmore and the Irish connection. There was no hint about our grandfather's three convict ancestors. Perhaps his origins had been kept from him. Perhaps Granny Smythe thought it was not worth mentioning, or was unmentionable. She insisted there were no convicts in her past.

From her Irish roots, she had the gift of telling animated stories, leaving indelible impressions. The seanchai (also spelt shanachie) of the Celts was the person who held the history of the community and was the repository of important information. In bygone days the stories were retold dramatically around the fire or by the fireside. Granny Smythe took on this role. The most mundane events in her everyday life inspired interesting anecdotes. 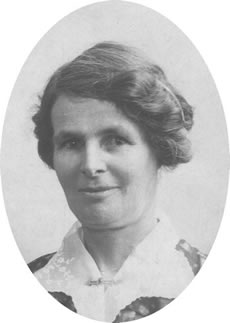 When her day’s chores were done, she relaxed on her front veranda in the afternoon sunshine and enjoyed making crocheted gifts for family and friends before she went inside to light the gas lights. If there were grandchildren staying with her there was usually storytelling in bed at the end of the day. She had the knack of finding an analogy or explanation which children could understand.

In spite of a permanent limp she had a regal bearing, and dressed elegantly to go out. She tolerated children running through the four-roomed cottage so long as doors were closed quietly. The child who let a door bang was reminded of the misdemeanour by means of a rolled up newspaper. It was probably the Sydney Morning Herald which she read every day to keep herself informed about world events. She devoured light romantic novels and was also keen on classical literature, although she had only had elementary schooling. A recently acquired wireless also helped her to keep informed.
A caring but forthright person, she had no time for slovenliness. She set herself high standards in speech and behaviour.

At times she coped with hordes of relatives in her tiny home and also visitors from Jerilderie on Billabong Creek, where they had previously lived, the children sleeping head to toe, several to a bed. Generous and concerned, she was always the one in control, proud of her organising ability. Intensely patriotic, practical and strict, she stood no nonsense from anybody and scolded children for misbehaviour.

Only to close adult family members did she admit her resentment of her two younger sisters who had not informed her of her father’s illness in time for her to visit, who had lacked sympathy during a devastating bereavement and who had become embroiled in litigation until they lost the family farm.

Most of what has been learnt about the history of the Smythe family is based on snippets recalled more than forty years later as well as family letters, diaries and documents. The combined memories of her older grandchildren have steered the research. Not all the interpretations coincided, some were conflicting. An effort has been made to include known eccentricities and distinguishing characteristics of our ancestors. After all, that’s what is interesting!